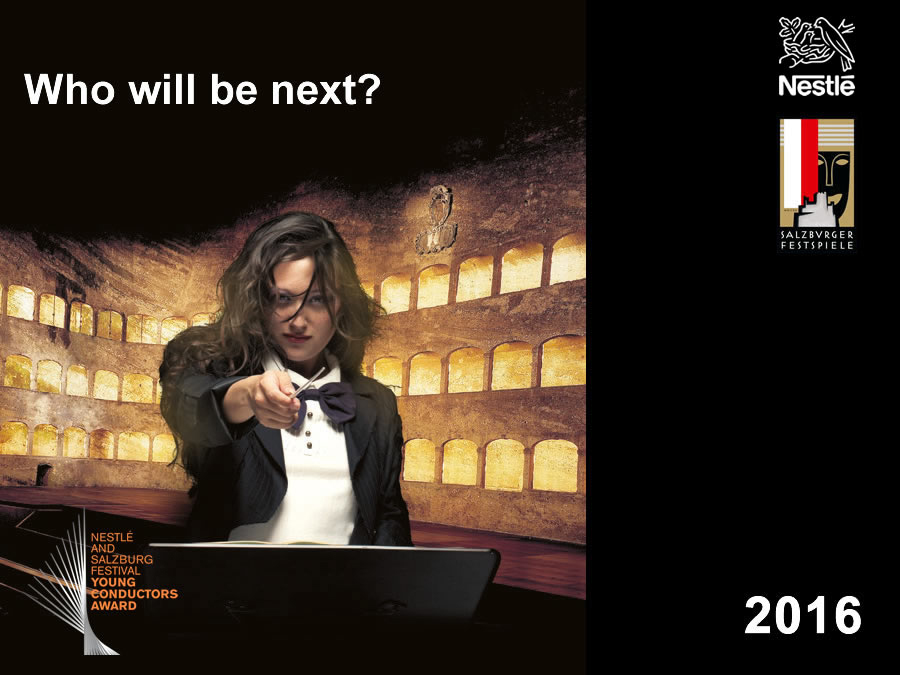 Nestlé and the Salzburg Festival share a common passion for quality. The continuous strive for excellence and the endeavour to link tradition and innovation are the foundations of our success. Both, the Salzburg Festival and Nestlé, are dedicated to the support of young talents. With the “Nestlé and Salzburg Festival Young Conductors Award”, an initiative that is unique throughout the world, we aim to discover young conductors from all over the world, and to contribute to the development of their careers.

The “Nestlé and Salzburg Festival Young Conductors Award” is a joint initiative by Nestlé and the Salzburg Festival. In 2016, the award – endowed with EUR 15,000 – will be granted to a young conductor by an international jury, chaired by Dennis Russell Davies, for the seventh time. This unique initiative aims to discover young talented conductors and to contribute to the development of their careers. Three finalists are offered the opportunity to conduct public concerts as part of the “Award Concert Weekend” during the Salzburg Festival 2016.
The award winner will then be given the chance to conduct a concert within the Salzburg Festival 2017 and a CD-production of this concert will be published within the edition of the “Salzburger Festspieldokumente”.

The “Nestlé and Salzburg Festival Young Conductors Award” has already supported six young conductors and contributed to the development of their careers:

For Nestlé, corporate social responsibility is not a mere slogan; it rather stands for a long lived tradition. Nestlé has not only cooperated with different communities and encouraged dialogue with stakeholders but also emphasizes artistic and cultural commitment. The basic prerequisite for any support from Nestlé is outstanding quality of a cultural institution, which led to Nestlé’s partnership with the Salzburg Festival in 1991 and its role as an active global sponsor ever since. All this years the support of young talents is central to our commitment.

The Salzburg Festival was founded by Hugo von Hofmannsthal, Max Reinhardt and Richard Strauss as a project against the crisis of meaning and loss of values after World War I and as a landmark of peace in 1920. Since its beginnings, the promotion and integration of young artists has been an essential task for the Salzburg Festival. Many great careers – especially those of conductors – were considerably influenced in Salzburg and have essentially contributed to the reputation of the Salzburg Festival.

The jury will select up to eight candidates from all the applicants. These eight have the opportunity to rehearse works of the 20th century with the österreichisches ensemble für neue musik (oenm) in the presence of the jury in Salzburg on May 8, 2016. The candidates are requested to prepare one compulsory piece and one piece out of three works for the “Contemporary Music Day”. The pieces will be announced in December 2015 on www.salzburgfestival.at/nestle_yca. After the rehearsal day, which is not open to the public, the jury will select the three final candidates.

The three finalists will be invited as part of the Salzburg Festival 2016 to conduct concerts on August 5, 6 and 7, 2016 with the Camerata Salzburg. The interpretation of contemporary music will be especially considered in the programming together with the candidates. The concert programme will be announced in June 2016.

After the third concert, the jury will identify and announce the “Nestlé and Salzburg Festival Young Conductors Award” winner to the public.

The award winner will conduct a selected orchestra, performing with a rising young soloist within the concert programme of the Salzburg Festival 2017.

The concert programme will be chosen in consultation with the award winner and is expected to be announced in autumn 2016. A CD-production of the Award Winner’s Concert will be published within the edition of the “Salzburger Festspieldokumente”.